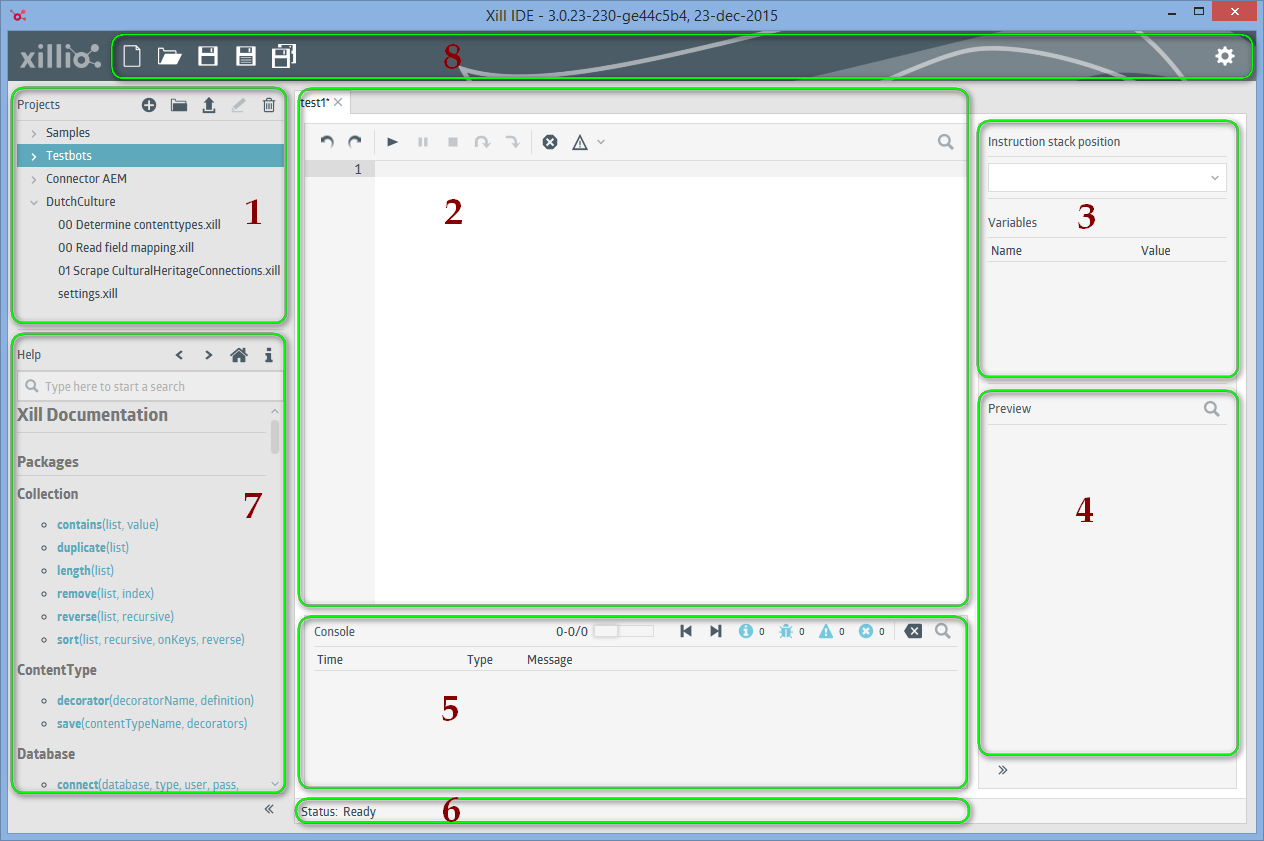 This is a file tree with all your current projects, folders and robots. It is a representation of parts of your file system. This view shows the user-chosen project folders, all their child folders, and robot files in them (which have the .xill extension), and hides all other files. Files and folders can always be edited outside of the Xill IDE, directly in an explorer window or something like that, and the updates will directly be reflected in the IDE project view. The project view itself also has some buttons for renaming files and creating folders.

Robot code is edited in this tabbed interface. Highlighting and code completion are provided, as well as buttons for search, debug and undo.

When a robot is in the paused state, you can see every variable in the current scope here. The instruction stack position can be changed with the drop-down menu to view the other simultaneously existing scopes. This is only a viewing option for the current moment of execution, so it does not look into the past or alter the execution.

When a robot is in the paused state, a preview of the variable selected above will be shown. Click a variable in the variable view (3) to change the selection.

This is where the output (like runtime errors and System.print messages) of the robot is shown when running it in the IDE.

The status bar shows in which state the robot currently is.

Every built-in function can be looked up in the in-application documentation. The functions are alphabetically ordered and grouped by package. There is also a simple search available.

The menu bar contains options for opening, creating and saving robots, and there is a settings button to the right that opens a tabbed window for IDE settings.

The two large panels to the left and right can be folded in and out by using the << and >> buttons. 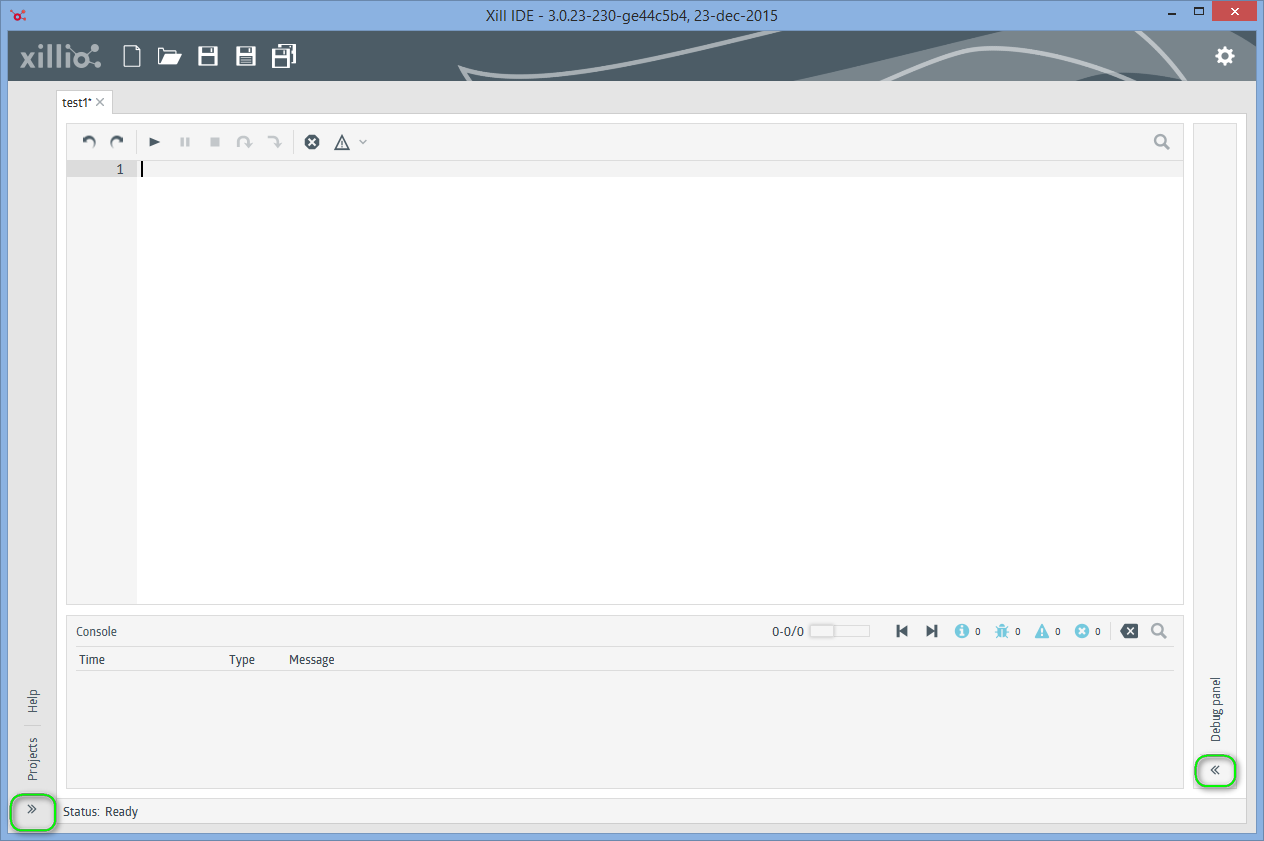 This way, there is more space for robot code and console text in the IDE window. Do not let this be a reason to type very long lines though, because that is considered bad practice in programming. Folding in panels is mainly useful when using limited horizontal monitor space (less than 1680 pixels in width).

There is search functionality available for your code, the variable preview and the console, all three activated by clicking the magnifying glass icon or pressing Ctrl+f. 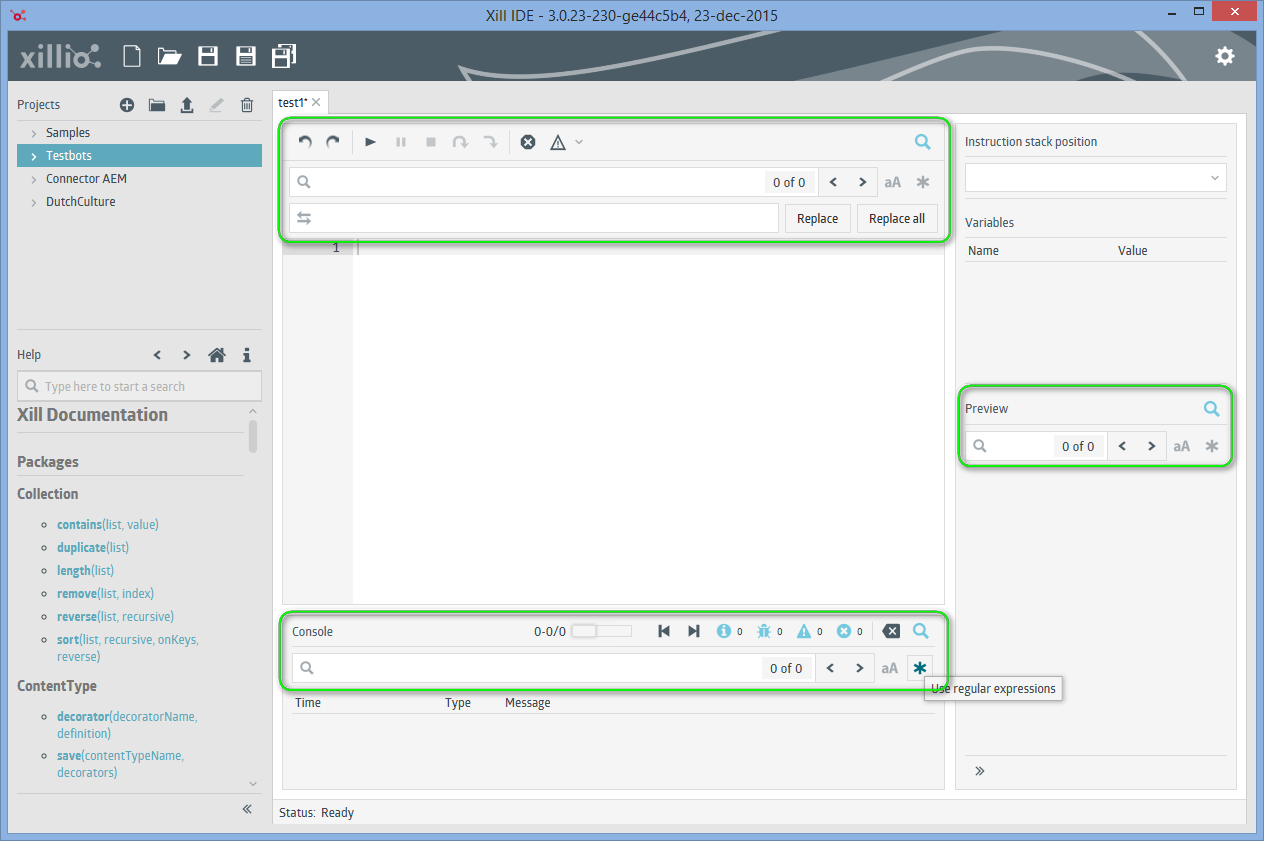 The search fields consist of:

The code search function, the one on top, also has replace functionality. It has an extra input field for the replacing text, and the buttons for replacing only the selected result or all occurrances in the robot.

On top of the console, there are also buttons to hide or show specific types of messages. This is not regarded as search functionality here and is described in the Console and logging tutorial.